The positioning among leading contenders was neck and neck throughout UBC Okanagan’s first ever Giving Day on March 6 as generous alumni, parents, faculty, staff, and other donors gave to their favourite causes. Fortunately for the crew of the UBCO Motorsports Club, they weren’t hurtling toward the finish line on a race track; instead, they were engaged in friendly competition among the 11 student projects being featured in this inaugural campus fundraising event. 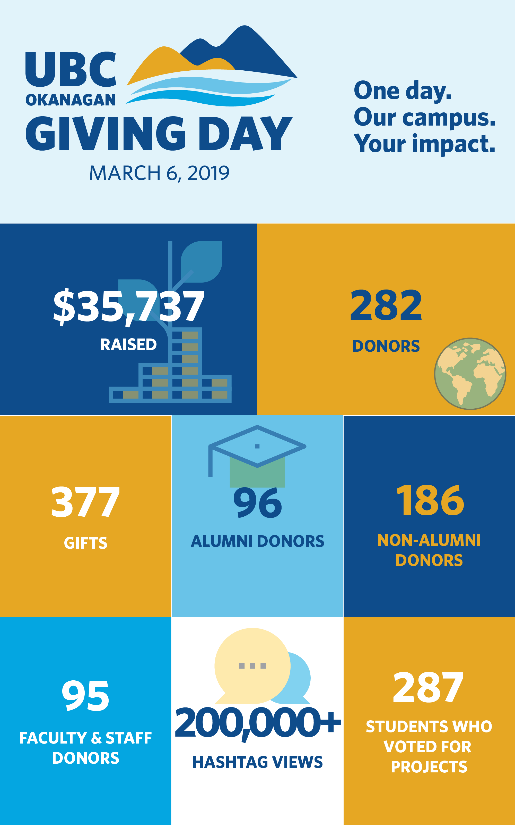 The dogs of the B.A.R.K. program almost took it by a nose, but UBC alumni supporters took the leader board in the final hours supporting students through the UBCO Alumni Bursary fund. Through this 24-hour giving challenge, donors were asked to give to their preferred causes – no amount was considered too small – while various community members mounted challenges which championed chosen causes and offered fund-boosting incentives that encouraged others to give. Funds raised would support the designated projects while also showcasing the spirit and generosity of the UBC Okanagan community.

The Vitalis Extraction Technology Challenge offered a gift of $2,500 if 20 people donated to Motorsports and if five students posted photos of the Motorsports car at the Giving Day event using the #DayoftheOK on social media. Motorsports supporters triggered this release of funds early in the morning, thrusting the club’s name to the top of the leaderboard where they remained most of the day. The team ultimately walked away with $5,624.01 raised, all of which Motorsports team captain Stewart MacDonald said would go toward operating expenses, including travel to annual races in Nebraska and Michigan.

The Motorsports Club is a student-driven extracurricular initiative involving a group of disciplined, highly motivated, and creative, problem-solving students – mostly studying engineering – who have combined their passion for sciences and business with car racing. Motorsports is a design and racing competition which draws competitors from leading educational institutions from around the world. More than this, the contest helps students to practice the theory they’ve learned in the classroom while developing their innovative-thinking skills and learning to work effectively as a team.

When informed of Giving Day, members of the UBCO Motorsports Club were eager and early in getting onboard as a featured initiative. Considering the team relies entirely on external funding for their operations, they quickly saw the value in the opportunity to raise funds and awareness of their club’s activities.

The club is also very active on social media, so the team saw its involvement as a natural fit. Club members used their personal and team-branded networks to inspire donations and, consequently, received a lot of support and encouragement from family and friends as well as fellow students, faculty and staff. Meanwhile, the club set up a display area for their racing car on University Way as part of the overall Giving Day celebrations. It worked, as a small crowd surrounded their tent for most of the day.

When asked about the Motorsport Club’s interest in participating in Giving Day next year, MacDonald said,

“Absolutely. We had a great time exhibiting our car and talking about our club, and we’re very grateful for the support displayed by the community. And the sooner we can start getting organized for it next year, the better. It pays to be prepared.”