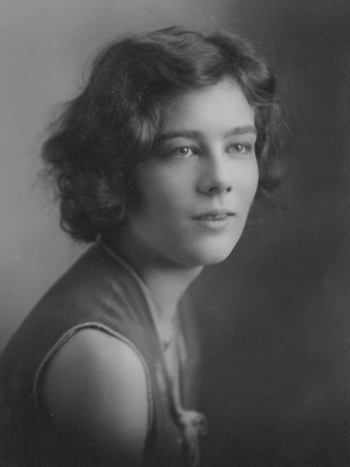 Remembered as an art collector, designer, and pioneer, Kathleen Florence Earle was a lively and energetic woman whose modern, forward thinking attitude belied her age. Before she passed away, Kay decided to donate her entire estate, including a heritage home built by her father, to support research and learning at UBC.

Born in 1911, Kay grew up in Kerrisdale, and showed a deep affinity for art at a young age. During the 1920s and 30s, she held many art shows and won several prizes. Most notably, one of her tapestries, featuring a map of Vancouver, was on display at Government House in Victoria for many years.

Kay attended Magee Secondary School and later studied art and design at the Vancouver School of Decorative and Applied Arts, now the Emily Carr University of Art and Design.

She moved to the Island after graduating and became one of the first female civilian draftspersons to work with the Canadian military. Kay also designed and built her own waterfront home in Esquimalt and filled it with the exquisite paintings, sculptures, and curios she loved collecting all her life.

Kay retuned to Vancouver in the 1960s and worked as a draftsperson for the City until her retirement in 1976. In her later years, she took up residence at the family home, which would be recognized with Class C heritage status as one of the first established in the neighbourhood.

In 2004, Kay contacted UBC to discuss her gift. She offered to donate her entire estate, including her home, to fund research in ophthalmology, allergies, and environmental pollution, three areas she was passionate about.

Kay Earle lived in a period of great transition, and was always full of stories. Her life was part of Vancouver’s evolution from a humble outpost to a world-renowned city. Although she passed away in 2009, her remarkable spirit lives on through the Kay Earle Endowment, which will continue to propel the city forward by funding research activities at UBC.

How do Gifts of Real Estate and Personal Property work?